Herman Lammers was the eldest son of Jan Gerrit Lammers and Cornelia Breunesse. Herman, born on 27 November 1922 in Amersfoort, grew up in a large family with five sisters and two brothers. His father had a construction company; he was a contractor/carpenter according to his family card. After lower secondary school at Leusderweg, Herman also completed a technical training at the ‘Middelbare Technische School’ in Utrecht. 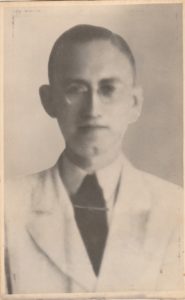 Called up for forced labour

Pieter Veenendaal was in the resistance; he was a contact between the national organisation and a local resistance group which operated out of his farmhouse. Using devices, such as broadcast units, they kept the allies updated in relation to German troop movements. The two cousins were probably also used for various odd jobs.

A loose-lipped evacuee made a fatal error, however, and on 15 December 1944, the German military police, the so-called ‘Feldgendarmerie’ stormed the farm. During the search, two of the young men in hiding attempted to flee. Herman was shot dead and his cousin was taken away along with the other men; they were ultimately transported to the Neuengamme concentration camp.