This was the home of: ETTEL STARK GOLDSTAUB-SEIF
Murdered in Sobibor on 26/03/1943

Ettel Stark Goldstaub-Seif was born on 10 May 1872 in Lemberg, now known as Ukraine. At the beginning of 1900, Ettel travelled with her husband and four children to Vienna. The orthodox couple was wealthy and had an antique shop in Vienna. In 1938, the family fell apart. Some of the children fled to Shanghai, grandchildren were sent on the ‘kindertransport’ (children’s transport) to England or escaped to Palestine, and Ettel’s husband died in 1939 in Vienna due to sickness. 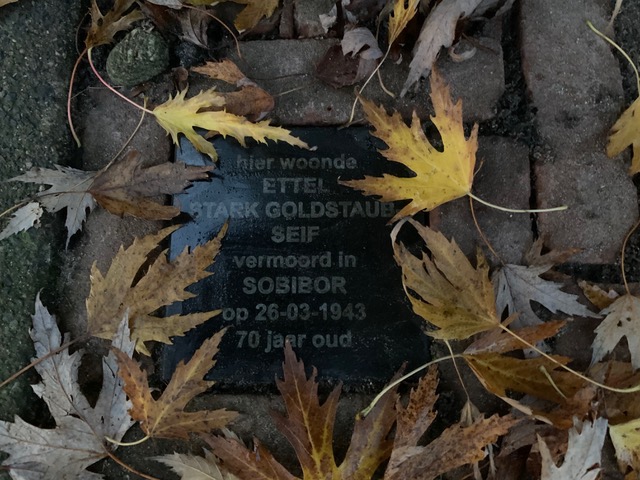 We hope to reach China quickly

With her son, Emanuel, she ended up in Amersfoort, via The Hague, in 1940. On 16 October 1942, they were forced to leave for Amsterdam and lived for a while on Muiderstraat 33huis. On 13 March 1943, Ettel was captured and transported to Camp Westerbork and, on 23 March 1943, was deported on transport number 55 to Sobibor. Ettel was murdered on 26 March 1943. Newspaper the Leeuwarder Courant from 1965 reported on the search being carried out by daughter Franziska Brodmann-Stark Goldstaub. In her hand, there was a letter from her mother: ‘Darling daughter, we hope to be granted our ‘Auswanderung’ to China very soon’.

Ettel’s son, Emanuel, lived a few houses along on Stephensonstraat 53. He was a merchant and married Annie Cack in Amsterdam. In the 1960s, his sister Franziska searched for her mother Ettel and brother Emanuel. A pile of letters with German censored stamps was all they had.